An expert conference  joined the festival, in order to adress general questions about the international theatrework in cooperation with the institute for theatrical sciences of the university  Leipzig.

The participants where awaited by the Theaterwelten-Festivalcamp in a special atmosphere, with short walks to the festival and directly besides the central catering.

The festival is hosted every two years. In 2017, it was hosted by the German Association for Amateur Theatre in cooperation with the Theater-Association of Thuringia. 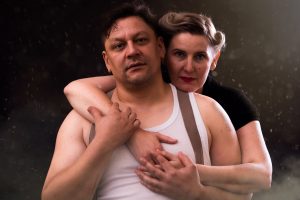 Skin Tight is the story of Tom and Elizabeth, who survive the war, but lose their farm; fight, make-up, love and grow old. A moving and magical love story, both passionate and brutal. Inspired by Denis Glover’s poem The Magpie Said, the play is about life on the land, the events of the 1940s and how a couple fight against death in order to stay together. This two-hander performance features extensive fight choreography and original Music.
Performance length: approximately 60 minutes

Maori theatre artist Rangimoana Taylor and Pakeha (= Nicht-Maori) theatre director Bronwyn Tweddle offer a practical experience of  traditional Maori theatre. Participants will learn some authentic Maori performance forms with traditional movements which imitate the birds of New Zealand, traditional Maori songs and war dances.  The workshop offers an introduction to the Maori culture and demonstrates in practice a cultural collaboration between a Maori and a non-Maori artist, as is common in New Zealand.

A Warm Place shows how in anxiety and depression the body takes over the mind. Trembling and kicking four dancers keep escaping every attempt to pin down the issue in thoughts and words until finally fatigue catches up and the mind finds itself still not understanding. A Warm Place is a personal testimony about living with depression and anxiety. It is a monologue of failing metaphores full of dance and pounding or whispering Nine Inch Nails music. A Warm Place reveals the mirror we show ourselves, how we try to comprehend our own mind and how suffocating that attempt can be.

In this workshop participants will catch a glimpse of the creative process resulting in the movement sequences of A Warm Place. The central question is how our bodies can understand, translate and express texts, music, ideas, emotions. Collectief Verloren developed clusters of meaning around themes and material they start out with. Working from these clusters rather than directly from the raw material allows performers to approach the material from their own personal background and creates an openness for the audience which allows for multiple layers to be read in the performances. The workshop will introduce this method to the participants through the movement.

The play is developed after humanity was divided by language and the wars for natural resources, in this context five characters with different origins and complementary skills, embark on a journey in search for water, with the body language as an unifying element, transversal to humanity. Through the circus, music, theater, dance and the manipulation of objects and marionettes the company Racún seeks to approach the public with this interdisciplinary proposal, making it reflect on the borders and what it means to share this land.

The workshop, given by 5 people with different and complementary skills, has the purpose of recognizing and enhancing the different possibilities of each person who takes the workshop by giving them new tools for the stage work. The intention is to show how the body, without the word, is a universal language that can bring us closer to understanding the person as a human being in a world without borders. Body awareness, manipulation of objects, play and complicity can improve the interpretive level, enriching it with nuances and skills that allow a greater range of possibilities when creating or standing on stage.

„1980 and upwards“ consists of separate sketches showing the guy’s born from 1980 year to now, his society problems, women’s problems in Egypt, marriage problems in Egypt, political life. The generation perplexity in this period will be discussed in this comedy show with Arab community issue.

In this workshop participants will get in touch with the art of improvising and learn how to create a play characters, create a drama for the play.

Malini (The Princess of Garden) is a poetic play by Rabindranath Tagore which advocates for love and compassion against hatred and revenge. It has connection to Nepal and especially to Nepali Buddhist scriptures. It is said to have been adapted from the Buddhist legend of Mahavastu Avadana which Tagore found in his friend Rajendralal Mitra’s The Sanskit Buddhist Literature in Nepal. The play deals with the historical conflict between the age old Brahminism and newly introduced Buddhism.